TORUS Records is an electronic and progressive Rockmusic label based in Germany and managed by John Elborg and Gergely Hubai. Our catalogue includes works by Sven Lendt, Detlev Schmidtchen, Manfred Wieczorke among others, and stay tuned for more amazing and interesting releases. 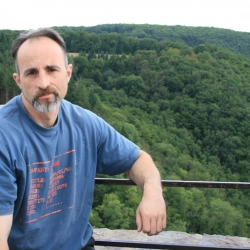 When I spent my student years at a boarding school in Schloss Plön, I rummaged through the LP collection of a friend. It was here I found the soundtrack to “Blade Runner”, an Ennio Morricone compilation and a few albums by Mike Oldfield. From this point onwards, I discovered the world of orchestral albums and soundtracks. The first record I bought was “The Wall” by Pink Floyd, followed by all other works by this great band. Back then I didn’t realize that type of music would accompany me later in my life.

I have a special affinity for the music of Sergei Prokofiev, Dimitri Shostakovich, Gustav Mahler, Miklos Rózsa, Erich W. Korngold and Ennio Morricone. When it comes to progressive rock music, my other favorites next to Pink Floyd are German groups like Kraftwerk and ELOY, who have never lost their appeal.

I bought the First Floor Entertainment in 2005 from the company’s original founder Richard Kummerfeldt. This aquisition allowed me to turn my hobby into my job. Since then, I’ve worked with several record labels: The Alhambra label focuses on German and Italian film music with over 100 releases in the past 10 years. Caldera Records was founded in 2013 as a label for contemporary soundtracks all over the world. I got the idea for Torus in the same year when I met Detlev Schmidtchen, a former member of ELOY. Torus is focused on releasing Detlev’s music and other similar prog rock compositions.